Check out my tours and services on tourwiththeresa.com

Homecoming at the National Etruscan Museum

Some New York and California residents, or frequent visitors to the Metropolitan Museum of Art and the Getty Center may be missing a few splendid pieces from their antiquities collections.  Thousands of Etruscan, Greek and Roman artefacts have found their way back home to Italy. Hundreds of these most famed ancient vases and sculpturettes are now on display at the National Etruscan Museum in Rome as part of an exhibition that celebrates not only the masterpieces but the masterworks of Italian and Swiss police that cooperated in discovering and seizing a decades long antiquities looting and laundering operation.  Here is an excerpt from a recent article I wrote for Wanted in Rome magazine on the current exhibition that ends in mid-December. 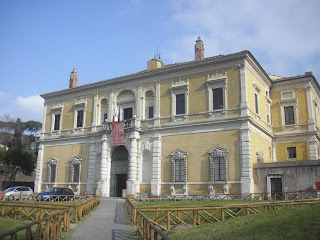 The National Etruscan Museums at Villa Giulia is displaying several hundred antiquities from among thousands illegally exported and now repatriated to Italy.  The pieces are mainly from central and southern Italy and are part of an exhibition that documents a decade-long criminal investigation and legal battle to obtain pieces that were sold after clandestine excavations all over Italy.

Posted by Theresa in Italy at 5:09 AM

*For more information on tours visit my website - tourwiththeresa

Borghese Gallery
The best of Italian 17th Century masterpieces including Caravaggio and Bernini, hundreds of antiquities, a Baroque palace, and a grande public park
Etruscan day trip-Ceverteri
Traveling with a private driver, journey 30 miles north of Rome to the Bandidaccia necropolis in the city of Cerveteri, the largest burial site in the Mediterranean. Tour an extensive collection of unique tombs modeled on and decorated as domestic architecture lined along routes designed as a city plan. Include also the option to dine along the seaside in a Renaissance palace La Posta Vecchia, built on top of the Etruscan port.
Wine excursion-Tuscany
Journey by car a couple of hours outside the bustle of Rome into the landscape of Tuscany. Witness rolling hills, manicured vineyards and stop for wine tastings and cultural visits in a couple picturesque Medieval Tuscan cities, such as San Gimignano and Siena.
Villas of Tivoli
Journey 20 miles outside Rome with a private driver and discover 2 of most spectacular and well maintained villas from the Renaissance and antiquity. First tour the beautifully manicured Renaissance gardens of Villa D'Este and saunter down the lane of 100 fountains. Then visit hundreds of acres of Hadrian's Villa meant to be the emperor's refuge from the bustle of Rome that now serves as yours while you get lost in a series of ruins of bath complexes, temples, and residences.
Scavenger Hunt for kids-"Safari d'Arte"
Designed for curious elementary aged kids, covering several different itineraries including main city highlights, while participating in an interactive scavenger hunt searching for clues at each main attraction with book and map in hand.
*Also consider any customized tour you can imagine focusing on the specifics of Ancient, Renaissance, and Baroque Rome.